How Does Turkish Automotive Industry Perform?

An overview on emerging countries: How does Turkish Automotive Industry Perform?

Turkey has been considered one of the most prominent countries among emerging markets, known as MIST (Mexico, Indonesia, South Korea, and, of course Turkey).

This acronym derives from a first definition assigned to the first group of emerging markets in 2000’s, the well-known BRICs, forged by former Goldman Sachs Asset Management chief economist, Jim O’Neill, whom predicted the overcome of the influence of those new economies around the globe.

Turkey’s economy has been one of the top performers in terms of GDP at global level after Lehman Brs. economic meltdown, values that topped the 10 % annual level, showing resilience to the impact of “main street” slowdown in its principal commercial partner’s economies, like the UE and the USA.

Moreover during the current year, the expected GDP growth is attended at a pace of 3-4% due to a slowdown in exportations mainly referable to political conflicts in the area and the protests surged in Gezi Park against the government, concerning social issues.

In order to analyse more in depth the trends related to the commercial trading balance during the first 5 months of the year, we kept a research delivered by the ICE, (Istituto Commercio Estero) the Italian institution appointed to develop commercial studies and assistance to Italian exporters: the research has outlined a boost both in the export and the import figures, at 6,1% and 8,1 %, year on year, totalizing $ 167,6 bln and $ 104,8 bln, respectively.

According to these studies, Turkey’s main commercial partner is Germany, as historical immigration reasons have had their influence, followed by USA, China, Russia and, as the 5th partner, Italy.

However, this figure doesn’t seem that good for Italian exporters, as the values show a negative trend on the import side (-6.7%), although the commercial balance is still on surplus at $ 8 bln, pointing out a reduction in the country market share.

The automotive sector is the main Turkish industrial exporter in terms of value: the trading balance has climbed in the considered period at almost 4% yoy, accounting a total value of $ 6.9 bln.

According to the results of the analysis in which the top 100 highest turnover generating Turkish and European companies’ data are used, we can highlight the main indicators of profitability like the Return on Equity and the Turnover growth, considered as the expansion in the inventories and growth expectations.

The three-year period considered shows important divergences between the two markets, where Turkish automotive producers have greater numbers in both of the ratios gaining a 14% on ROE and turnover ratio that has gained more than 60% of the volume increase for 2011. 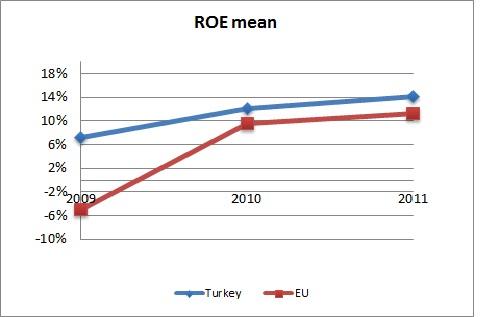 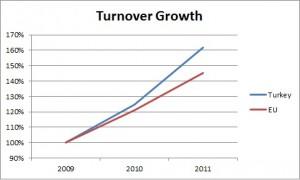 Figures remark difficulties of EU automotive market momentum, while the profitability has climbed significantly between 2010-2011, turnover growth is still far behind their Turkish counterparties, mainly due to lack of internal demand.

Moreover, the research about financial stability indicators surprisingly reveals that also the leading companies’ financial structure still delivers better figures for Turkey than for the EU: the MORE Rating methodology assigns a level that exceeds the BBB level (more than adequate) for Turkish companies with a financial leverage of 0.34 in 2011 that evidences a more intense utilisation of shareholders’ capital (otherwise it could possibly mean a smaller dimension and difficulties to access to internal credit system). 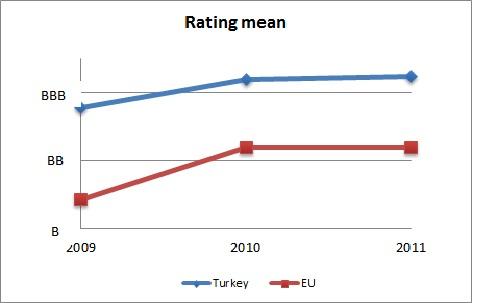 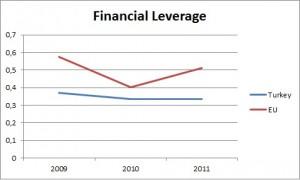 Finally, we should consider also the figures that involve the Istanbul Borsa as a main indicator of economic boom in last few years. According to data Istanbul Index BIST 100 in mainly composed of multiproduct listed holdings and financial service companies, which performed from 2009 to nowadays with a capital gain around 400% from the bottom market registered the 5th March 2009. This gain sloped down sharply after Gezi demonstration, from almost 93.000 points to 73.000, but still we believe there is room to go back at the previous Borsa values in a while, as the main threats are not connected to market risks but more on external issues like politics and geopolitics.