Welcome To The Club Croatia!

As of July 1 2013, Croatia is fully and happily European Union member as the 28th member state. Croatia has a population of 4.3 million people. In terms of age structure, the population is dominated by 25-54 year old segment (41.4%) and GDP per capita is 61% of the EU average. Country as a youngest member of the EU, with a budget deficit of 4.4 percent of GDP this year and public debt approaching the EU ceiling of 60 percent of GDP (source: Reuters) looks like having important challenges ahead.

It can be smoothly stated that the economy of Croatia suffered strongly during 1991-1995 war. During this period country missed the improvements in Central and Eastern European region. However in 2000-2007 period, Croatia caught some improvements in its economy as a steady growth in between 4 per cent and 6 per cent GDP (source: databank Worldbank, Croatia) thanks to tourism and consumer spending. There was also a stability in the currency, ”Kuna”, as well as inflation. In the same period, economic and social opportunities considerably improved. In 2000, Croatia became World Trade Organization member, followed by a Stabilization and Association Agreement with the EU in 2001. However, the country’s economy had its share from severe global financial crisis in 2009 and the country entered in a recession for four years. The exportation which is life ring for the young developing economies tumbled by 25% in 2009 followed by a fall in GDP by 6.9% and the rise of unemployment rate from 7% to almost 20%. Nowdays, the unemployment rate has reached 22%, while the youth jobless rate is 52%.

Today all world knows that one of the advantages that Croatia definitely has is its alluring cost composed of more than 1.000 islands which every year brings country an important income flow. The country attracts not only usual tourists but also worldwide known profiles such as Google co-founder-Larry Page’s brother-in-law, who had his wedding ceremony last week in a beautiful town-Motovun, Croatia. The Croatian coast which has crystal clear sea together with a virgin nature, small towns, churches and historic monuments to explore makes the country an amazing holiday place for not only Europeans but also Russians and Ukrainians. Since it has just entered in the European Union, the country will have to request visa from non-European countries; still it is not well known whether this will lead a drop in tourism income but on the other hand the country is expecting more visits from EU citizens which might compensate the possible loss.

Thanks to diverse types of climate, soil and landforms Croatians can produce a wide range of agricultural products as the country is famous for its fish, olive oil, wine and different types of salami. Agriculture generates 5% of Croatian GDP. 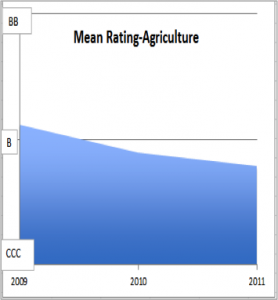 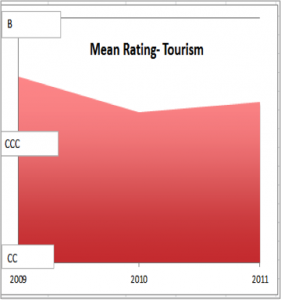 Considering the fact that 69.2% of Croatian GDP in 2012 is generated by services (source: CIA World Factbook), checking the financial & economic fundamentals of both tourism and agriculture has become even more attractive.

Although tourism and agriculture are shining stars for Croatian economy, the companies operating in tourism sector look like having problems: The graph 1 (see above figures), based on the analysis of 2,653 agriculture companies and 2,958 tourism companies data, illustrates a pessimist picture. From 2009 to 2011, there is a constant fall in the mean rating of companies in agriculture sector (the ratings are falling from B: “Weak” in 2009 towards CCC+“High Danger” in 2011). The tourism sector’s performance does not look very bright either since in the three year period credit ratings assigned to the companies always remained below B (Weak) levels.

Conducting an analysis structured on the financial data of 2,958 companies operating in tourism sector and 2,653 companies operating in agriculture sector in the given period, the growth of turnover in both sectors has also been analyzed via Graph 2 (see above figures). Accordingly, for agriculture sector, the total turnover generated increased by 10.29% and for tourism by 13.3% in 2009-2011 period. 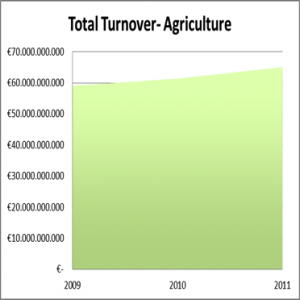 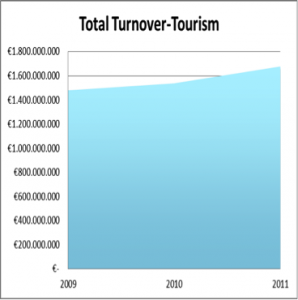 The EU funds which amount to 10 billion Euros will for surely have an positive impact on developing new agricultural projects and attracting new investments in tourism area in coming years, but we also hope to see the recovery in companies’ financial performance.