Comparisons of the costs in Europe: an approach from the companies’ analyses [Part 1]

Lately in Italy it is so often talked about the cost of labor and how it adversely affects the economic and financial performance of the companies. Some believe that it is too high (and whenever a cost is not high !) ,while others , a bit more attentive to the real business dynamics, believe that it is in line with Europe, and that the causes of inefficiency Italian business performance are others.

As we in modeFinance have our own assessment of credit risk worldwide, I thought it would be interesting to study the performance of Italian firms , compared with some European countries like France , Spain and Germany . The aim is to be able to understand the underlying dynamics between different states, and really understand where inefficiencies come from. To do this study, very useful data of Bureau van Dijk, a company with which modeFinance has a partnership, have been employed (www.bvdinfo.com).

First of all, we start with the official European data on labor costs, which can be found at the following link; by reading this document it is understood as the cost of labor in Italy is high, but in fact it is pretty much in line with European states (France and Germany show even higher values) .

But what do the financial statements of companies tell us? Surely if we read carefully these data we can find useful answers!

I have selected the companies in this way : I’ve taken the 50,000 companies with the highest turnover in the four countries: Italy , Germany , France and Spain , then I have studied all 200,000 companies , particularly the financial statements of the year 2012 (practically the latest available ones).

This indicator I have created in this way :

This indicates, for a company, the average cost per employee. I then determined, with the analysis of the percentiles (link) ; distribution of this indicator in different states. 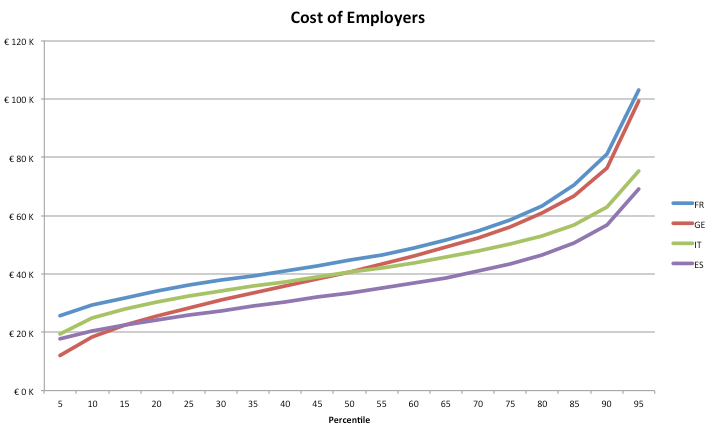 Result: The Italian labor cost is on average with the European one : even the financial statements of the first 50,000 largest companies say it.

2) Profitability Analysis of the companies

At this point , however, I have a doubt: the cost per employee is on average, however, can it be said that the companies are not profitable, is this true?

To understand it, I have created an indicator of profitability.

And I did the same thing as before (calculated on the financial statements and distribution percentiles) : 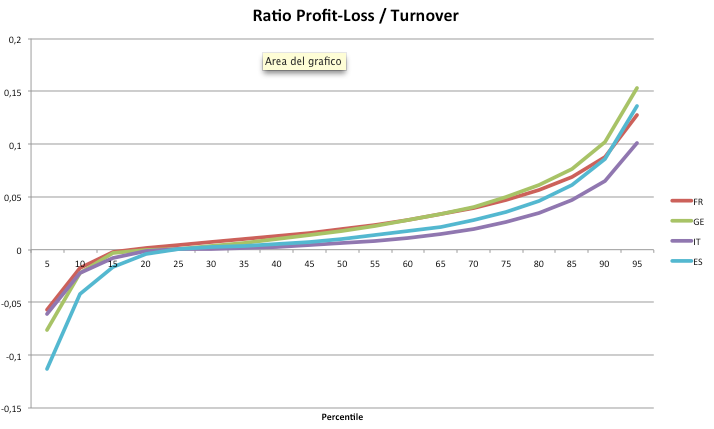 Result: it is true, Italian companies are not profitable.

But at this point the question arises: Italy has not profitability, but the labor costs are in line with other countries: so, where is lost the competitiveness?

In the second part of this post (next week), I will start to give some answers!