The financial crisis has brought with it not only the collapse of the banking and economic system, but also that of sovereign governments. Precisely for this reason, we started to put more and more emphasis to the stability of governments and economic systems of the states, where public debt has begun to weigh (Greece is bankrupt ‘ technically’ because of it ) on state treasuries (accrued interest to pay it off).

For this reason, we wanted to explore with you a question that may be important for a company: can the country’s rating affect the rating of an individual company?

1 . Effectiveness of the government and the institutions and the security risk (institutional and governance effectiveness score) 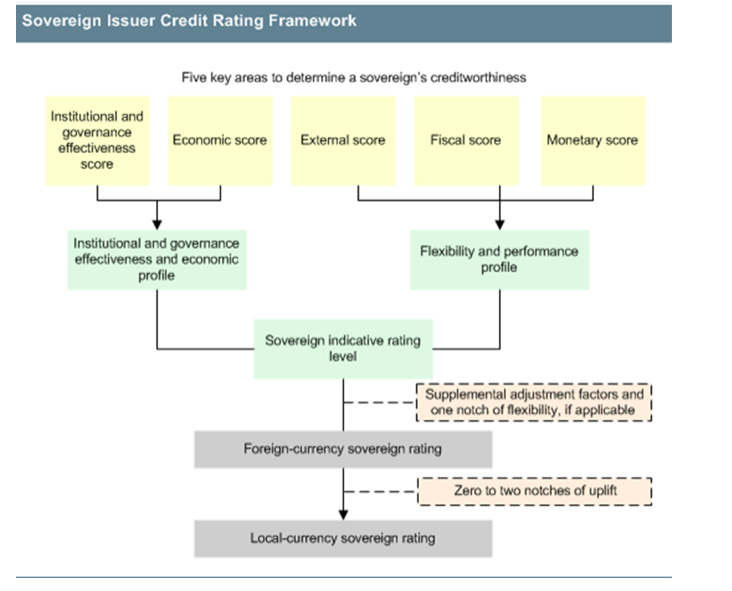 On the basis of these features the rating of the country is determined (list of ratings by country: link).

In a recent analysis conducted by modeFinance, we were interested in understanding the specific influence that Italy’s rating could have on a company that has an office in this country. On 10 July 2013 Italy was downgraded by Standard & Poor’s (rating confirmed on 13 December 2013, link ): from ‘BBB +’ to ‘BBB’ with a negative outlook (S&P announcement: link and the news and link). 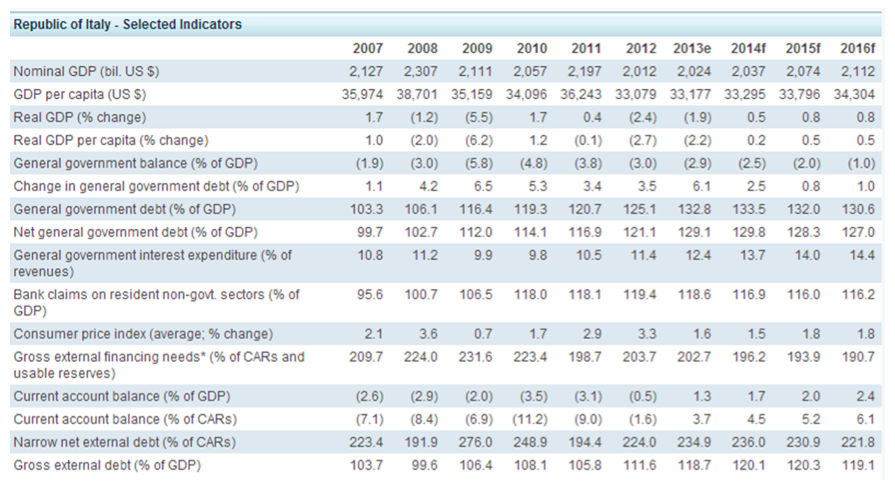 The main reasons for this downgrade, as expressed by the rating agency are as follows : a strong rigidity of the labor market and productivity, which leads to a reduction of competitiveness in European and global level, the ineffectiveness of the reform plan implemented by the Government, and finally a level of taxation on labor and capital much higher than that on the assets owned and consumption. All these reasons have led the Agency to downgrade the long term rating of one ‘notch’ ( a step in the rating scale ) from ‘BBB +’ to ‘BBB’ ( while remaining in the category of lower medium grade, link). In addition, the outlook is negative, this situation could change only in the case of the Government has begun to implement a plan of structural reforms aimed at increasing the competitiveness of labor and productivity. Just a plan of effective reforms could help to raise the level of economic growth, which remains in negative territory. Also according to Standard & Poor’s, another solution would be the sale of assets and privatization that could lead to a reduction of the Italian public debt (Source Eurostat : in the second quarter , Italy’s public debt to GDP stood at 133.3 %, according to Eurozone only to Greece with 169.1 %).

After having seen the situation in Italy, now we get to see how and if this influences the rating of a company. In our investigation we have considered an insurance company that is based in Italy. We discovered this company, a few days after the Italy’s downgrade, has been downgraded from ‘A’ to ‘A – ’ with a negative outlook.

Our goal was to go to figure out if this was related to the ratings of Italy, or there were solvency / stability reasons of the company itself.

So, as a first step we went to check the situation of the company and comparing it with its main competitors in the insurance industry. To do this, we have considered some key indices, both profitability and capital structure : the ROE ( return on equity ) , ROA ( return on invested capital ), the Profit margin and Investment yield ( yield of investments) as regards profitability, while the indices of structure that we examined were the Solvency ratio and the Reserve coverage ratio.

From this investigation, it emerged that actually the situation of the subject we studied was in line with, if not slightly lower, with those of major competitors in the industry, so the level of operations of the company did not justify the downgrade decision made by S&P.

1. High incidence of the liabilities held by holders of Italian policies, about 30% of the total;

The downgrade of the insurance company is derived from the Italian downgrade of the country, this is because in addition to a number of factors that bind a country to its companies , the first is certainly the participation in the debt, through its bonds (link).

The company in question has an amount of government bonds equals to more than double the Shareholder funds , and therefore more risky it becomes the state more it will be for the company that owns bonds.

The first factor is linked to the performance of the market and its growth : if we think that Italy was downgraded because of lack of development and stagnation of its domestic market ( consumption and productivity). In the specific case of the company that we have considered; a large part of the premiums had been issued to Italian subscribers, about 30% of the total ( the highest percentage compared to all other markets ), the second reason for the credit rating of the country actually influences the rating of the individual company.

In summary, we analyzed the rating of a sovereign government seeing in detail all its facets. We have considered a company operating within this State, and we have seen that its operational situation was at the same level of competitors, but despite this fact its rating has been downgraded. The reason for this choice we went to search for it in the composition of the portfolio of the company and the geographical area in which the activity takes place. In both cases, the company is tied to the country in which it is located: the Italian government securities represent a large proportion of the total assets and the other side 30% of the premiums collected.