Payment Behaviors or rather Payment Delays in Italy

Payment behaviors are seriously important signs for detecting financial and economic health of a company. Frequent delays in payments can be nightmares for whoever involved in business. If there are undefined changes and delays in the payments of a company, one can and should cautiously check the company’s financial health since it might be a strong indicator of a coming insolvency.

We, in modeFinance are frequently asked analyses and studies on this subject since everybody would like to see how payment behaviors are going on, what the future risks are when analyzing a company, sector, country or even macro regions. In recent posts we analyzed Cash Conversion Cycle analysis on different sectors in our blog.

The impacts of Euro Zone crisis were for sure also felt in companies’ payment behaviors both in Italy and other EU countries. Actually many reasons can be listed why the companies delay in their payments; it might be macro-economic situation, insufficient management or some bad games organized by some unethical entrepreneurs. Of course, macro-economic reasons are not the most desired “negative” realities but either this reason or that; every day we see a clear fall on the invoices paid on time.

Considering all these facts, we first looked at macro facts of Italian economy then gave a detailed look to the payment behaviors. In following parts, the results of a freshly made study by modeFinance will be presented.

1. Macro-economic Indicators: GDP of Italy vs. Rest of the World

Clearly observed thanks to the graph of GDP evolution, starting from 2011, Italy has regularly recorded a significant decline in its GDP with respect to not only emerging countries but also mature economies. 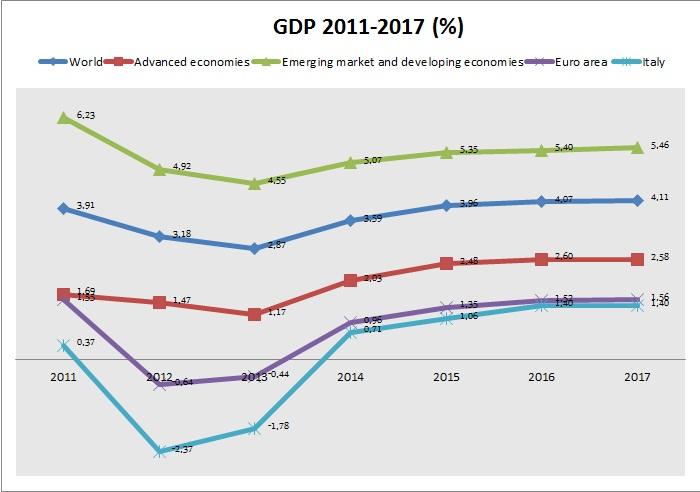 Apparently, since the year 2014 a humble recovery is expected still remaining below the other economies.

The problem in Italy is not only the evolution of GDP, but the high rate of unemployment. The numbers today are worse than expected by economists, who were predicting a confirmation of the 12.7% recorded in December. 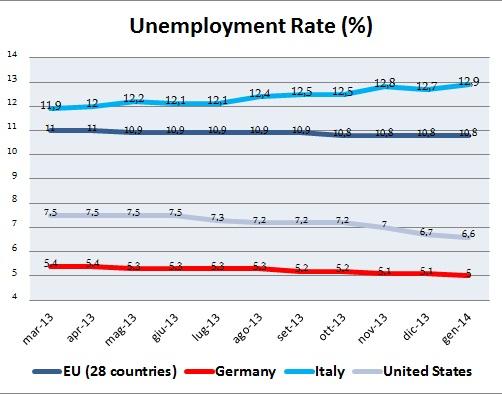 3. The Reflections on the Rating

The decline in GDP, rising unemployment and lack of competitiveness in a global level are just some of the observations of a severe macroeconomic situation. The financial viability of the companies has dropped sharply in recent years as studies show the average rating assigned by modeFinance. The median values do not even reach a level of BB (you can find more information on MORE rating methodology here) or in other words the economic / financial adequacy: 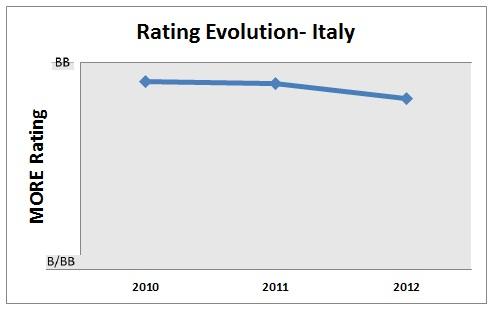 After having analyzed the macro indicators of the country we can come back to our core subject: Payment behaviors. The situation described above is even more dramatic if you think that the companies were no longer supported by the banks and they absolutely must learn how to manage their assets /cash cycle.

A comparison between the payment behavior of Italian firms against the world, that the payments are “longer” for at least 35 days by tapping a maximum of 100 days for small businesses in Campania. Following Campania region we also see long delays in Calabria with 99 days of delay, Basilicata with 98 days. It can easily be said that the longest delays are observed among the companies generating turnover of 500-1000k€. These figures are extremely interesting indicating that Italian companies are seriously delayed in their payments when compared to rest of the world. 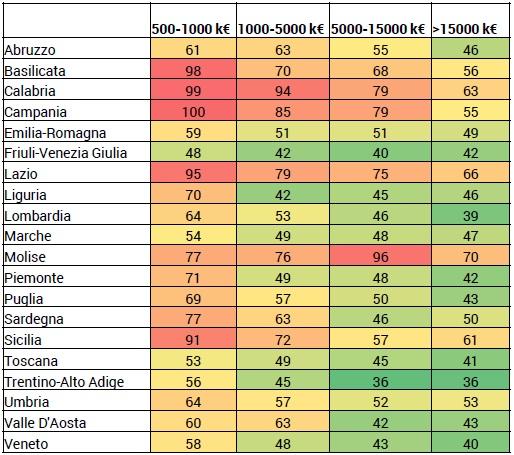 ModeFinance study is based on comparative analysis of tens of millions of the world’s financial statements and the calculation of days payment providers –Source: BVD- Orbis Database

When we want to see the situation not region by region but in terms of more macro areas, the picture is something like this:

The comparison between large and small companies is also worth to see as illustrated in the following graph. Here, we see that for the group with a turnover of 500-1.000k € : the companies which are in line with the global average capture a percentile of 29.20% while the companies which delayed paying their obligations with more than 90 days occupies 23.06%. The companies with a turnover higher than 15.000k € have the highest share for the ones which delay for 30 days (30.18%). Hence we understand that the bigger the turnover, the shorter the delays in payments. 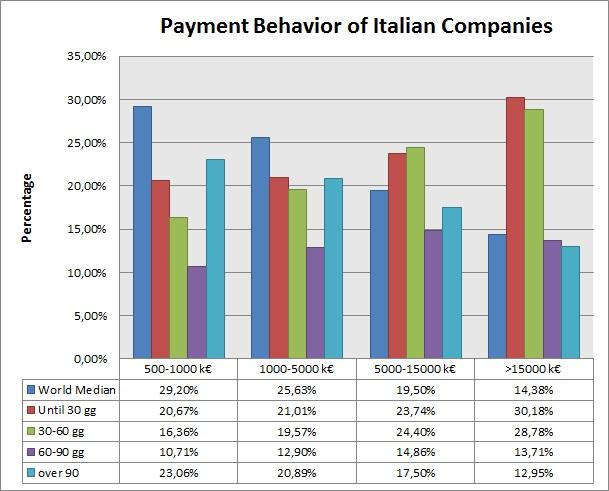 If we want to see the performance of Italian companies to meet their financial commitments according to the macro regions, the look would be as follows: 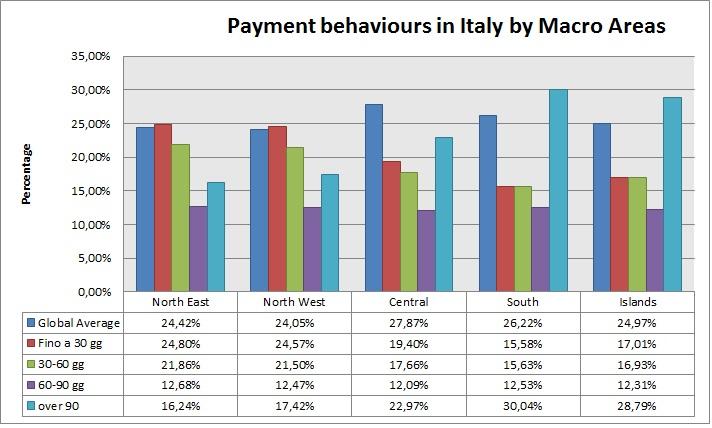 Here, we can see the payments region by region:

North West Italy: Still the highest share belongs to the companies which pay 30 days later than the world average (24.57%).

Central Italy: Here, we see 27,8% of the region is in line with the global average payment days. The companies which are late in paying their obligations by 90 and more days constitute a share of 22.97%.

South Italy: The southern companies have the highest share for the delays more than 90 days (30.04%).

Islands: Also in the Islands, the companies which delay more than 90 days occupy the highest share with 28.79%.