How to check if a rating model is valid [Part 2]

Today we continue the study of the methods that should be used to understand if a rating model is appropriate or not.

The last time we had seen and analyzed the first two points that a model should possess:

Now we conclude the analysis of the remaining key features:

Comparability between the theoretical probability of default and actual default rates.

Often for methods of credit scoring the theoretical probability of default is formed by the application of a mathematical formula: following an optimization process which aims to minimize an error function (or a likelihood function) is obtained by the so-called “Probability of default” or PD.
The values ​​of PD must not only be validated but, through a complicated process of calibration, they must be modified so that they can express the actual default frequency of the sample studied. This process is often complicated and not without pitfalls.

Since the probability of default associated with the score (hereinafter PD (score)) must meet two basic requirements: be monotonous and satisfy the constraint 0 ≤ ≤ 1 PD, we generally prefer to use a function exponential of the form y = aXe^(bx).
The steps to be followed for the determination PD (score), are the following:

The estimate of the free parameters a and b must be conducted through a optimization to minimize an error function; generally using the method of least squares.

Below is an example of calibration: 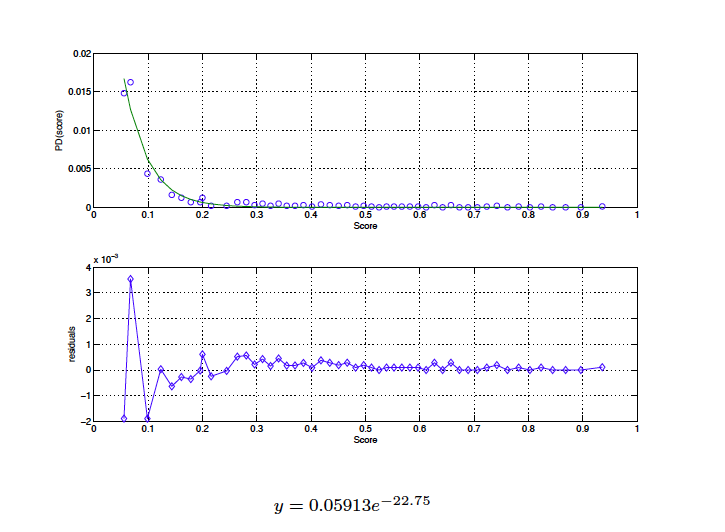 As stated in the requirements which ECAIs should possess, migration matrices play an important role; more precisely it notes that “agencies must still possess historical data covering the annual rates of default – theoretical, where available, and effective – and matrices transition with a temporal depth of at least 5 years.
They must also be calculated cumulative default rates in three years reported on the basis of such series.
Compliance with this requirement is checked even temporal in relation to the size of the cohorts for different rating classes in each year. ”
For transition or migration is defined as the change in the credit of a counterparts. We shall, therefore, by estimating the probability of migration from one rating class to another; these probabilities are represented in a transition matrix M = [mij] of dimension (SxS), where s is the number of rating classes (including the class D = default). The probability quantifies mij the probability that during a certain time horizon (typically a year), a counterpart to migrate from the rating to rating j. The properties of M can be summarized as follows:

But because they are of such great importance matrices migration?

Because from their observation can be drawn two basic information:

In these last two posts we have seen as a rating model must be validated. It is essential to know these methods because only applying them efficiently you can give assurance to customers that the assessments are really accurate!