To patent or not to patent? That is the question!

One of the topics of greatest interest in recent years in the field of scientific research and technology transfer to companies is their run to patent products and processes.
Across Europe at the political level there is a boost, thanks to dedicated funding for companies to have recourse more and more to these instruments.


Obviously from the point of view of financial analysis and assessment of the credit risk that we do in modeFinance there arose the curiosity to see how patents affect on the economic / financial companies in Europe.
The question we asked ourselves is simple:

Companies that have a patent are showing a better financial behavior than those that do not patent?

With our partnership with Bureau van Dijk and our own technology MORE Rating, modeFinance we is able to respond efficiently to this question!
What we did was:

And here are the results!

Comparison of the numerosity of the companies with and without patent: 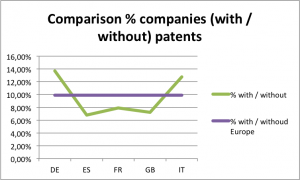 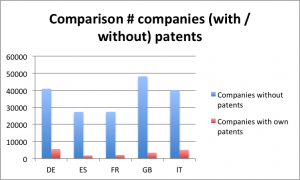 As can be seen from the charts, the number of companies without patent, as expected, are lower than those with patent: the average of the ration (with/without) in these countries is about 10% (in absolute terms about 18,000 companies).
The countries which are more virtuous are Italy and Germany with similar rates, and close to 14%. Spain, France and the UK show lower values.
In absolute terms, Germany (with about 5,600 companies) is the state with several companies that have patents, followed closely by Italy (around 5,200 companies).
These graphs help us to understand the distribution of the companies, and nothing about their economic / financial performance.
For this we need the following graphics.
Compare the financial scoring of companies with and without patent.
We remember how the MORE Rating (link) analyzes the quality of the economic and financial companies; the final evaluation is a number between 10 (very good companies) and 1 (very bad companies).
The first chart shows the comparison between companies that have patents: 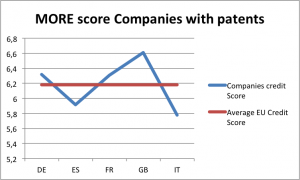 This chart shows us the situation of loss-making Italian and Spanish companies in the comparison with the European average and the other three states.
If we look at the same chart but for companies without patents: 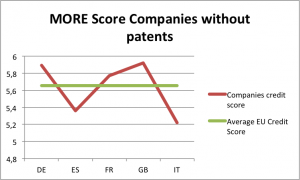 The situation does not change: even here Italy and Spain deficit with Europe. Note the English hegemony in both cases!
But now we come to the final chart: what we ask if and how companies that own patents perform better or worse than those without patents. 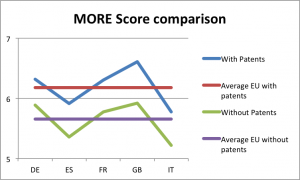 And here the results are really interesting: the companies with patents undoubtedly have an economic and financial performance better than companies without patents!
The difference is significant and is constant among all states! The difference can be evaluated in about half rating category and leads to a result of great importance: for example, we see how the Italian and Spanish companies that patent have performed better than the European companies do not patent. This means without a doubt that the patent helps significantly also the economic performance of individual companies and!

Patent or not patent? The answer is clear: do patent!