How to evaluate bank creditworthiness

The ratios for understanding bank rating

The public interest in bank evaluation is increased after the bankruptcy of Lehman Brothers that triggered a global financial crisis. Before that event, it was never considered a bank could fail because of the philosophy too big to fail.
What does it mean? When an institution was "big" (in terms of value of total assets or assets managed) nobody could think about its bankruptcy, but it was easier rely on a government intervention. But Lehman Brothers in particular was not helped, so it failed without any chances of revival. After this incredible and extraordinary event, we know the situation in the global market degenerated and, as a consequence, the attention on bank trustworthiness increased exponentially. For this and other reasons, we started to focus on bank evaluation and in the following post we would like to share our vision on creditworthiness analysis of a credit institution. theory tells us what are the ratios that need to be studied and what should be their value for understanding the risk of the company evaluated.

As for the company analysis (see ratio analysis for dummies), we consider several areas:

All areas have been considered because they can well analyze the creditworthiness of an institution.

The profitability studies the ability of the bank to generate revenues capable of covering costs. As a first look, the institution has to register positive economic results, otherwise this is a first warning of something going wrong, because it means it is incapable of managing costs in accordance to revenues. It depends on the size of the loss, but negative results erode equity and, as a consequence, reduce bank’s own resources.

Recently, there is a rising interest toward capital adequacy of credit institutions, also because of Basel Committee's recent decisions (Basel Committee on Banking Supervision) to increase capital adequacy ratios. Why? Because the equity of the bank is the first cushion for eventual stress periods, as the Total Shareholder funds in a company.

The main ratio of this area is the Leverage ratio, calculated as Equity on Total Assets. It analyzes the portion of total assets financed by own resources. The higher the ratio the better the performance of the bank.

The following ratios are explicitly considered and determined by the Basel Committee and they are:

Tier 1 Ratio and TCR are evaluated considering the following formula:

Another relevant problem could have an impact on bank creditworthiness is doubtful loans. Loans are the most important part in a bank balance sheet (above all in commercial, cooperative and saving banks). Deteriorated loans have been a relevant problem in the financial crisis: banks have accumulated too many bad loans to become unable to repay its debts, because total assets had lost value.

Loans quality ratio = Reserves for impaired loans/Gross loans
in this case it is evaluated the weight of total doubtful loans on gross loans. The reserve comprehends the total amount of impaired loans, cumulated year after year.

This area examines one bank’s ability to meet its short term obligations. In the last years, above all in Greek banks, we assist to the phenomenon of the so called 'bank run'. This happens when a large number of customer of the bank withdraws cash from deposit accounts at the same time because they believe the institution could become insolvent. This event, also if the bank was not already insolvent, could cause bankruptcy of the institution. As a consequence, regulators start to pay attention on liquidity ratios capable of analyzing if the bank has necessary funds to face this event.

Some of the ratios are reported below:

Loans Deposits = Loans/Deposits. In some countries there are restrictions on this ratio where are considered Loans to customer (in total assets) and customer deposits (liabilities) that has to be lower than 100%. Sources and the funds have to be balanced so it is better the bank has the same level of customer deposits and loans.

The last area we've considered is efficiency: it measures the institution's ability to turn resources into revenues.

The ratio gives investors a clear view of how efficiently the institution is being run - the lower it is, the more profitable the bank will be.

In the following table, you can find a summary of the areas and the ratios that have been considered in the present analysis: 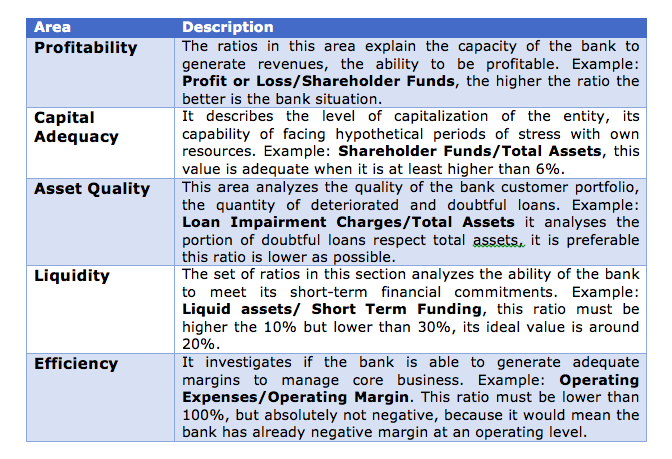