"Fuzzy" hardly suggests precision. But as an approach to credit risk modelling - as with many braches of applied mathematics - it has surprising and significant advantages over more traditional methods, driving global uniformity and accuracy across the spectrum of credit scores.

The MORE model provides a creditworthiness opinion - or assessment - alongside a MORE class, ranging from AAA through to D, with "healthy" companies at the top and "risky" ones at the bottom. "Assessments" are qualitative but detailed and substantiated. A "balanced company" with a MORE class of BB, for example, would be given this assessment: "The company's performances are adequate considering the sector and the country in which it is operating". Warnings are flagged up with riskier companies, as are votes of confidence for better performers that are lower credit risks.

This model is the fundamental basis of modeFinance analysts' rating assessment activities. Some of these are manual but those in which we're mainly interested are automated according to the algorithms of the model and detailed data from Bureau van Dijk.

Here one example why Fuzzy is important in Credit Risk Analysis:

"So it is clear that an unbiased analysis of financial figures cannot leave out of consideration the context the company is working in: any ratio must be 'interpreted'."

Just one type of ratio is considered above; others included in the MORE model include: solvency (such as debt to equity and debt to assets); liquidity (such as the "quick ratio", "current ratio", days' payable outstanding [DPO], days' sales outstanding [DSO]); other profitability ratios (such as return on investment); interest coverage (such as EBIT on interest paid and profits on interest paid); and constraints on efficiency (such as financial profit and loss, profit and loss before or after tax, and EBIT).

So how does fuzzy logic tie in with these figures?

In modeFinance the MORE rating model is made from up to 40,000 different models. This seems far-fetched until you break it down: they deal with around 150 countries, nine sectors, two accounting standards and about 15 ratios. Multiply all of those numbers and you can see his argument. Explaining the full theory is outside the scope of this paper but we can gain a good understanding of the main principle from this graph of the fuzzy transformation for the profitability financial ratio: 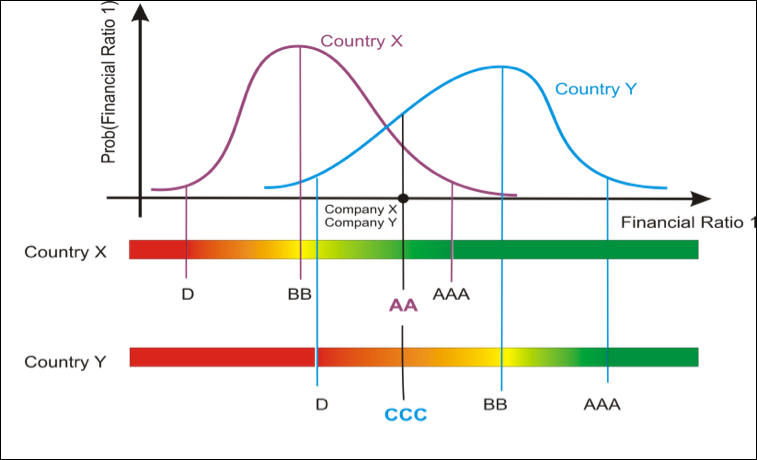 The x-axis measures profitability ratio (although other ratios would generate similar graphs). The y-axis shows the probability of a company in a given country attaining the ratio it maps to on the x-axis. So the peaks of each graph effectively correspond on the x-axis to the most likely ratio for the performance of a company in the given country.

As it can be seen in the graph, the MORE model fixes the BB rating class as the median value of the ratio distribution, while the upper and lower rating classes are fixed in accordance with the financial rating distribution. Based on this adaptation, Company X gets an AA rating for its ratio because it performs relatively better than other companies in the same country. But Company Y gets a CCC rating because its ratio is worse in comparison with other companies in its country.

From this, the MORE model produces these main outputs, which appear in company records on our databases: risk class; probability of default; confidence level (a metric that says less about the company in question and more about modeFinance's faith in their opinion on the company, based on the level of detail in the financial information available); opinion about the ratios' values; comparison group analysis; and MORE credit limit.

You can find all White Paper about the integration for the MORE score into the Bureau van Dijk products at the following link
Share and recommend this page: