modefinance published the Solicited Corporate Credit Rating of Global Power Spa on its CRA website, and the rating assigned to the entity is B1- (first issuance).
The analysis revealed an adequate company, with average capability of repaying financial obligations and shortly affected by the adverse economic scenario.

Global Power Spa was founded in 2004 and operates in the energysector, as a supplier of electricity and gas. The Company operates as asupplier of important Italian companies and public entities.

The Company has a sufficient economic and financial situation, characterized by low capitalization, which leads to a significant financial indebtedness. The current ratio is below 1, but the liquidity area shows a cash cycle ratio in line with the reference peer group, while the profitability area expresses sufficient and growing ratios compared to the previous year. The analysis of the cashflow shows how it supports its liquid assets thanks to the contribution of credit institutions: its financing activities are able to cover the absorption of resources generated by the operating area, which is affected by an inefficient working capital’s management, where the Company will particularly improve in the next few years.

Bank of Italy’s Central Credit Register indicates how the Company has not recorded any dispute or serious credit lines management’s anomaly. The Company does not highlight any situation of high financial stress, having reduced the overdraft facility risks’ tension during the analyzed period. Furthermore, the Company records several slight overruns, including episodes along maturity risks occurred in the last twelve months. The Company has a collegial form administration, composed almost exclusively by external figures; Global Power Spa has a board of auditors and an external auditor firm as well.

The ownership of the Company is easily attributable to the Zoccatelli family; the Company is managed by a well-defined corporate structure. Regarding the entity’s size, the position of the company is perfectly median, while solvency and profitability ratios are below the sector median, with signs of weakness. The peer group recorded a downward trend in its solvency ratios, which are to be considered adequate. Furthermore, the peer group registered constant liquidity indicators, higher than 1 and adequate; in the end, the profitability ratios slightly increased in 2019, showing an adequate value.

The energy sector is currently experiencing animportant transformation, gradually abandoning some historical sources in favorof an increasingly massive use of renewables. Within a future prospect, thestability recorded by the Company’s turnover in 2020 is interesting andappreciable. Italy’s macroeconomic situation is significantly influenced by thepandemic, on which the domestic confinement decided by the Italian governmentseems to have had a fundamental impact.

In the following table, the addressing factors, actions or events that could lead to an upgrade or a downgrade are summarized: 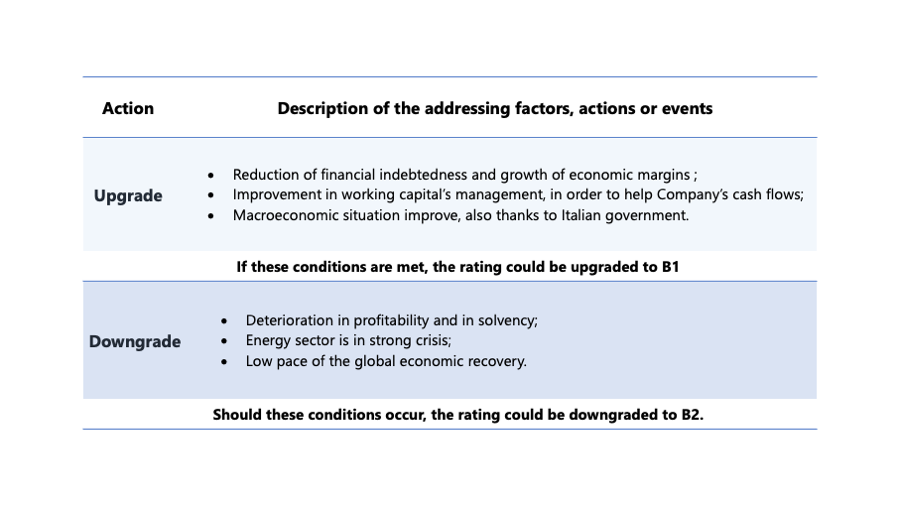 No amendments were applied after the notification process.
The rated entity is not a buyer of ancillary services provided by modefinance.
The rating action issued by modefinance was performed independently. The analysts, members of the rating team involved in the process, modefinance Srl and its members and shareholders do not have any conflicts of interest in relation to the Rated Entity and/or Related Third Parties. If in the future a potential conflict of interest is identified in relation to the persons reported above, modefinance Ratings will provide the appropriate information and if necessary the rating will be withdrawn.

The present Credit Rating is an opinion of the general creditworthiness that modefinance issues on the rated entity, and should be relied upon to a limited degree. The issued rating is subject to an ongoing monitoring until withdrawal.